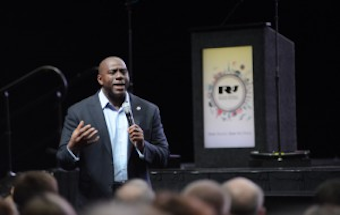 I expected the usual celebrity keynote—a stirring motivational speech to a starstruck audience, with only a tenuous connection to the convention theme. Seen one, seen them all. So I was surprised and genuinely impressed to see Magic show up and talk shop like a pro—better, in fact, than a lot of marketing veterans who make their living talking shop. Not only did he light up the room the moment he took the mic, he worked a ballroom with thousands of people like he was in his living room hanging out with friends. He’s good.

The Art of the Assist

Magic Johnson was never your typical showboating sports star. Unlike other NBA giants, Magic didn’t rack up records for points he scored, but he holds an array of NBA records for assists. He didn’t try to carry his team, he made everyone on his team better, and in the process helped his team win title championships everywhere he went. It’s a style of play that focuses on the team rather than the star. It’s what the NBA is now promoting as “Hero Ball”, and what the Warriors have focused on here in the Bay Area to make it to the playoffs.

Magic took his approach to teamwork to

the business world after retiring from the NBA, and has built a string of successful businesses, along with a few failures. Sure, he’s leveraged his name recognition, celebrity and wealth for ventures in the expected places—sports apparel, and sports teams—but he’s also earned hard-won successes with movie theaters, coffee shops, real estate, insurance and even food concessions for Disney. When he talks shop, he’s not repeating motivational babble for marketing, he’s talking from the experience of his own wins and losses, and how he’s played the game.

Building on the Fundamentals

The actual content of Magic’s keynote wasn’t anything new, but that’s the point. Sustainable business success, like basketball, isn’t built on insider secrets to be sought out from gurus. It’s built from a relentless dedication to the fundamentals.

“Sustainable business success, like basketball, isn’t built on insider secrets to be sought out from gurus. It’s built from a relentless dedication to the fundamentals.”

What impressed me about Magic was that his understanding of the fundamentals didn’t come from an MBA, but from an obvious commitment to playing hard, taking hits, and learning from mistakes. In his telling of anecdotes from competing with Larry Bird to his first failure with a clothing brand, Magic laid out many of the? fundamentals:

To marketers, this is all as basic as shooting a free throw. But when you see a guy making the clutch points in a championship, it’s not because they’re a star, it’s because they spent endless hours repeating those fundamentals. Magic’s strength, on and off the court, seems to be his ability to learn those fundamentals quickly and apply them, rather than rely on any amazing skill to get around them.

Sure, Magic has advantages few of us can replicate. Most notably, he can always work with
the best, and they will always return his calls. We mortals have to work harder to find partners and talent, we have to be more persuasive in demonstrating our value, and we have to learn how to figure out who will be successful among the second and third string players we can afford and attract.

But at the core, what makes Magic successful in business is accessible to anyone—a relentless commitment to practicing the fundamentals, playing to win, and focusing on assists over scoring every point for ourselves. That’s what makes a winning team and a winning business.

My Question for Magic

There’s one question I wish I’d thought fast enough to ask Magic at the summit. I know it’s a long shot thinking he might actually read this post and respond—he does a lot of speaking to a lot of crowds. But here it is, and if you have your own thoughts, I’d love to hear them too:

When you’re building a winning team, there will always be big egos. Is the ability to be selfless when it counts and play for the team something you can teach, or is it a quality you have to select when picking your players—and what do you look for?