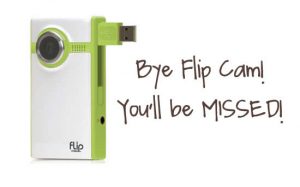 Cisco announced yesterday that they’re killing the Flip brand, as part of a general restructuring to focus on their enterprise business. This is the first “bold move” following CEO John Chambers’ “Mea Culpa” published last week:

Today we face a simple truth: we have disappointed our investors and we have confused our employees. Bottom line, we have lost some of the credibility that is foundational to Cisco’s success – and we must earn it back. Our market is in transition, and our company is in transition. And the time is right to define this transition for ourselves and our industry. I understand this. It’s time for focus.

Killing Flip is certainly a bold move, but while it decisively narrows Cisco’s focus it also presents a number of questions about Cisco’s management acumen.

SocialRep was deeply immersed in the pocket video market when Cisco purchased Flip. At the time, we were conducting a number of social media intelligence programs for Creative Labs in support of the Vado, analyzing the market engagement tactics of Flip, Kodak and others. Initially we were scratching our heads at Cisco’s purchase of Flip—why would such a successful enterprise hardware company make a play for consumer video?

Like most analysts, we assumed there was a wickedly smart strategic decision behind the purchase, and we started closely watching Cisco’s job postings, patent applications and FCC filings in the space. Eventually we figured they must be making a play to take their real-time telepresence product to the consumer market. Imagine Grandma having a TV set-top box that can exchange real time video with the grandkids. It could also be an entry level telepresence system for businesses all the way down to the level of SoHo. Lots of telecom hardware and network bandwidth required. Made sense. Sort of.

With video capabilities just showing up in the iPhone at the same time, who couldn’t have foreseen the future of real-time video right on your mobile phone? Indeed, most analysts at the time were already calling dedicated pocket video devices a transitional market, as video converged into smart phones. We reasoned that Cisco, with so many resources and firepower, understood all this and must have something up their sleeve. Turns out we were wrong. They apparently just seized on a shiny object and didn’t really have enough forethought to see where it would all go.

Okay. So now Cisco sees the error of its ways and makes a decisive move to cut back to its core competency, which is enterprise, not consumer. And making decisive moves means acting quickly and with purpose. Fair enough. But the shiny object they bought has a huge following. It’s a strong consumer brand with a lot of goodwill and brand equity. Brand equity has real value on the balance sheet. And yet, Cisco’s decisive move was to cut it out with a carving knife and throw it in the trash. Really?

Once again I find myself assuming Cisco must have a method to their madness. Surely they did a lot of due diligence, hired a brand finance expert to calculate Flip’s brand equity, and determined that the write down was worth more than the value they could get for Flip on the market. But given what we know now about their foresight in buying Flip, I’m wondering if that’s really the case. Maybe Chambers just got religion about getting back to Cisco’s core focus and took out his carving knife, damn the consequences. It may be decisive, but decisively throwing away value seems like a strange way to build confidence with investors.